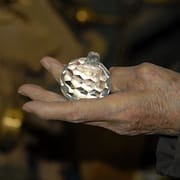 I am friends with Sergio Rossi and his family. I don’t know how many times Sergio mentioned to me that when the furnace moved from “Ponte dei Basi” to Serenella, his father’s stock was boxed up and kept in a basement. The sentence I just wrote would provide material to write another two separate posts! The first would be about Bridge of the Kisses, when Murano was half covered by gardens that was the place young couples would go for intimacy; second: there are no basements in Murano or Venice: the basement is the first floor. 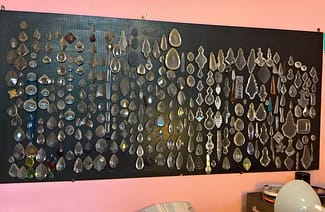 Alfredo, Sergio’s father, had a cut crystal glass company, famous worldwide. For those who are not used to the term: cut crystal pendants are….Swarowsky. Alfredo’s products were known for being hand polished, with crisp cuts and fantastic light refraction. This is a lost world, but objects from it still exist. Alfredo hangs out at the Bar il Duomo, the old workers cooperative in Murano. Tourists don’t go there but if you are in Murano it’s the best place for “polpette di baccalà” (cod croquettes) and pizza. Of course we met up, and I was practically obliged to cancel all my appointments in the afternoon and went to see… Aladdin’s cave.

Too bad that this is not the product I work in. It was really moving. Alfredo is 93 and can barely see, yet he fumbles around and knows exactly where every piece is.

He has a  huge stock of hand made cut crystal pendants with an incredible variety of shapes. Many brass parts from Florence 50s casts are just stacked in a corner. There are complete chandeliers in brass and crystal. In the mid-century style he had two disc chandeliers; this was something I could help him with.
I found a box full of Petri dishes. I had heard that Murano at the beginning of the 20th century was making industrial glass, such as power line insulators. But I wasn’t aware of scientific instruments being made there. Alfredo explained to me that he had worked with “vetro neutro” which is a kind of glass that does not release chemicals, and thus worked for scientific labs. I got one for my daughter who is in biotech. An original vintage Murano hand-made Petri dish!
If you end up reading this post and are looking for a large stock of original Murano hand-polished cut cristal, old Florentine brass castings and anything relating to them, write to me! It would be a great pleasure to introduce you to the Rossi family.

Want to join the discussion?
Feel free to contribute!

Alberto Donà and the Donà family